I wish to share this information with our members.....Doug. editor

Let's say it's 6.15pm and you're driving home (alone of course) after an unusually hard day on the job.

You're really tired, and frustrated……

YOU ARE REALLY STRESSED AND UPSET ….


Suddenly you start experiencing severe pain in your chest that starts to radiate out into your arm and up into your jaw.

You are only five miles from the hospital nearest your home.


YOU HAVE BEEN TRAINED IN CPR, BUT THE GUY THAT CONDUCTED THE COURSE DID NOT TELL YOU HOW TO PERFORM IT ON YOURSELF !!!

HOW TO SURVIVE A HEART ATTACK WHEN ALONE?


SINCE MANY PEOPLE ARE ALONE WHEN THEY SUFFER A HEART ATTACK, WITHOUT HELP, THE PERSON WHOSE HEART IS BEATING IMPROPERLY AND WHO BEGINS TO FEEL FAINT, HAS ONLY ABOUT 10 SECONDS LEFT BEFORE LOSING CONSCIOUS

DO NOT PANIC, BUT START COUGHING REPEATEDLY AND VERY VIGOROUSLY.


A DEEP BREATH SHOULD BE TAKEN BEFORE EACH COUGH, THE COUGH MUST BE DEEP AND PROLONGED, AS WHEN PRODUCING SPUTUM FROM DEEP INSIDE THE CHEST.


A BREATH AND A COUGH MUST BE REPEATED ABOUT EVERY TWO SECONDS WITHOUT LET-UP UNTIL HELP ARRIVES, OR UNTIL THE HEART IS FELT TO BE BEATING NORMALLY AGAIN.

DEEP BREATHS GET OXYGEN INTO THE LUNGS AND COUGHING MOVEMENTS SQUEEZE THE HEART AND KEEP THE BLOOD CIRCULATING. THE SQUEEZING PRESSURE ON THE HEART ALSO HELPS IT REGAIN NORMAL RHYTHM. IN THIS WAY, HEART ATTACK VICTIMS CAN GET TO A HOSPITAL


ARTICLE PUBLISHED ON N.º 240 OF JOURNAL OF GENERAL HOSPITAL ROCHESTER

TELL AS MANY OTHER PEOPLE AS POSSIBLE ABOUT THIS.

IT COULD SAVE THEIR LIVES !!! DON'T EVER THINK THAT YOU ARE NOT PRONE TO HEART ATTACK AS YOUR AGE IS LESS THAN 25 OR 30. NOWADAYS DUE TO THE CHANGE IN THE

LIFE STYLE, HEARTATTACK IS FOUND AMONG PEOPLE OF ALL AGE GROUPS.
No comments:


"LIVING AND LOVING AFTER PROSTATE CANCER"

FOR MORE INFORMATION AND TO REGISTER 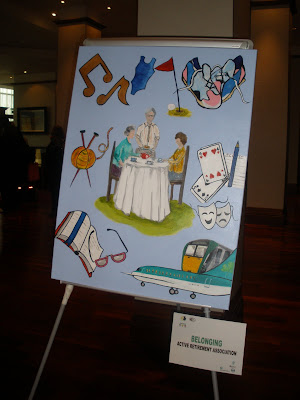 The diversity of services,support groups and activities show how much
we depend on each other and how dangerous and pointless it is to isolate oneself when there is so much help so near.

It is wonderful to see communities gathering together to show solidarity in the face of savage cuts in the health care budget. 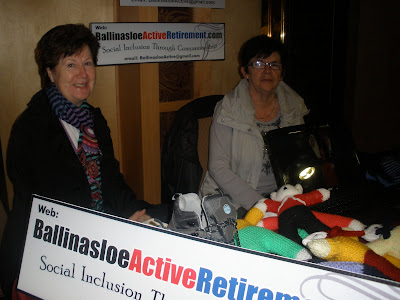 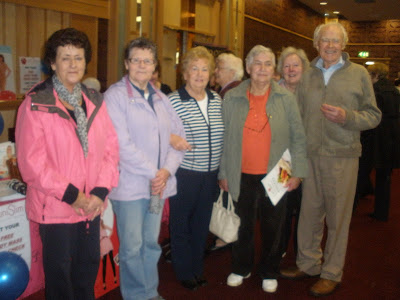 BALLINASLOE ACTIVE RETIREMENT ASSOCIATION SEMINAR
Nearly a hundred members of the Ballinasloe Active Retirement Association braved the elements last Thursday to attend their seminar on `Older Persons Needs and Cares`. Despite the heavy snow fall, Brian Judd C.E.O. Active Retirement Ireland made his way from Dublin, Pascal McDaid Member A.R.I. &Retired Programme Manager former W.H.B. travelled from Galway. Kevin Molloy National Chairman Active Ireland travelled up from Wexford.
Louis Finn Chairman of the local branch welcomed and praised all in attendance and read out apologies. Jimmy Crehan who was chairman for the day got the meeting underway.
Brian Judd outlining the structure membership and aspirations said that there were 428 local associations,7 regional councils with 23,500 members. This vast untapped membership should be the reference point for the delivery of reports and recommendations on how we should live our lives, Some State sponsored bodies are piggybacking on the Associations Membership to further their own aims
Quoting Mary Harney(11Th. December 2006) `The support system around long term nursing care are scrappy, inconsistent and unfair They turn the issue of going into a Nursing Home into a trauma for the individual and for their family` This from the Minister for Health does not inspire confidence in the direction the care for the elderly is taking. Commenting on Nursing Home reports on the H.S.E. web site which contain comments like `substantially in compliance` he suggested they contact ‘Failte Ireland’ on how a report should be presented. He was heartened to part of a national organisation which increasingly was taking a very active role in how their future is being mapped out.
Jimmy Crehan said in his address that the generation now in retirement and under so much pressure, were the generation who sacrificed to ensure for a better future. Thrift and hardship ensured our children got the best possible education and care. Tax at 60%, P.R.S.I. and Superannuation made us fully paid up members of this state. Trust and faith were placed in Governments that better times were to come `the rising tide would lift all the boats ` we were told. It was felt that the 1970 Health Act was there as a safety net, the ultimate protection, this turns out not to be so.
The handing over of the care for the elderly to private nursing home industry was done without consultation and almost by stealth. Fifteen years ago one million people were working in this country and there were 200 beds in St. Brendan’s home in Loughrea. To day we two million working plus the increase in the population and the extra wealth yet the capacity of St, Brendans is being reduced to 120 beds. Scandals, the ever increasing cost of beds and the inability of the H.S.E.to close down private nursing homes because there are no publicly funded beds is a disgrace. This makes all efforts at regulation and inspections futile and a waste of time and money.
Calling for nothing short of a complete reversal of Government policy regarding the provision of adequate publicly funded beds Mr,Crehen also pointed out the whole concept of home care (means tested) is an attempt to wriggle out of the provisions of the 1970 Health Act.
The phasing out of the excellent Alzimers service in st. Brigids on top of the closure of the Alcoholic unit previously, without any local alternative provisions is difficult to understand. Accepting that day care and meals on wheels is dependent on charity shows where the misguided celtic tiger culture has led our society.
No excuses are acceptable to Mr.Crehan, the Government of the day he said will point out that millions are being spent, but the services are not being delivered. Accountability has gone out the window. The health service looks completely different from the bottom looking up than from the top looking down. From the top down it`s all about advisers, managers, titles, from the bottom up it`s all about trolleys, lack of service, and M.R.S.A.
Pascal McDaid gave a very comprehensive and honest assessment of the former Health Boards. While pointing out that the Health Boards lacked uniformity and were subject to local pressures, the H.S.E. has become too centralised and remote. With no way of influencing, what is in effect, one of the most important aspects in everyday life, people are dissatisfied with the new arrangement. A case in point was the non appearance of the main speaker from the H.S.E. who was to talk on the future plans for the western region.
Refuting the proposed Fair Deal discussion document as a completely dishonest effort by the Government to move the goalposts, he said, provision has already been enshrined in law for the care of the retired and elderly in the 1970 Health Act. What is now being preposed is another form of indirect taxation on the elderly , a one % levy would encompass a properly funded scheme for all citizens now and into the future.
A very lively discussion took place when the meeting was thrown open to the floor. The sale of the Mental Hospital grounds, which are a asset to the town, without assurances that some of this land be set aside for social projects was voiced most adamantly Fears that once the land is sold the proceeds will just vanish into the vast H.S.E. bureaucracy were voiced. Many voiced their disappointment and anger that the representative of the H.S.E. chose not to attend the meeting, after arrangements were altered to accommodate him. A general feeling of helplessness and the feeling that as citizens, nobody was listening to the ordinary person was also expressed. Amazement was expressed at the thought process that closed the Alcoholic unit and the continuance of that policy in running down the alzimers ward. People are living longer. Alcohol is being abused, the population is growing yet those charged with forward planning cannot see that these services will need to be expanded instead of closed down
Louis Finn thanked all who attended especially the speakers and closed the meeting.
No comments:

The Hidden Misery
Jimmy Crehan, through his work with the Psychiatric Services in Ballinasloe and elsewhere, was very aware of the importance of involvement in activities outside the home after retirement. He often said that loneliness can be, and often is, the cause of ill health. At one of our usual Wednesday afternoon meetings, it was decided that a talk on depression, “The Hidden Misery”, should be organised and made open to the public. Jimmy and Chris O'Flynn got to work. Jimmy contacted and booked Dr Margaret O’Grady, the newly appointed Consultant Psychiatrist for the Western Health Board, to give a talk on Thursday, January 23rd, 2003. Chris booked the Regency Room in Hayden’s Hotel, and looked after the advertising.
On the morning of the 23rd January, Jimmy and Chris went to the Hotel to organise the seating. They put out four/five rows of chairs initially – better three or four full rows than a room full of empty seats! They need not have worried however; by 7.45 the good support from our own membership filled the few rows. Gradually, more and more people began to arrive. More chairs were needed. By 8 p.m, the room was full, and some had to stand by the walls. Dr O’Grady arrived.
After the initial introductions, her first words to us were that mental illness is a highly treatable condition. That positive note set the tone of the meeting. After she concluded her presentation, she invited questions from the floor and invited those who wished to speak to her personally to wait after the meeting. A queue formed. Dr O’Grady was so kind and approachable that she spoke to each individual in that queue.
That meeting was the first venture of the A.R.A. beyond the confines of our organisation, and it was a resounding success.
Detta Power
No comments:

Walking has long been recognised as the healthiest and most efficient method of exercise that humans can indulge in. During these dark days of belt-tightening and fiscal rectitude we can also add “excellent value for money”! The Ballinasloe Active Retirement Walking and Exercise Club have been enjoying walking and physical exercises now for up to two years. Each Tuesday at 10.30 sharp they gather at venues in and around Ballinasloe and spend 30 – 40 minutes in enjoyable walking followed by light stretching and joint exercises. Under the watchful eye of coordinator, Jimmy Lyons, and led by two trained instructors, the sessions have proved to be enjoyable and beneficial to all concerned. They conclude with a well earned tea/coffee, biscuits and chat. The sessions form a healthy as well as an important social occasion. Padraig Pearse’s Club in Woodmount generously allow us the use of their complex and walking track free of charge for which we are very grateful. We also visit many other walking sites throughout the year. As our motto in the Association is “stay active,stay healthy” come along and join us at 10.30 a.m. on Tuesday mornings. You will enjoy the experience! For further information contact 090-9642531 or 9683614
No comments:

Béal Átha na Slua (Ford at the mouth of the River Suck)
Ballinasloe occupies a strategic location on the N6 National Primary route linking Dublin and Galway and is one of the principal gateways to the West. The town owes its origins to its location as a crossing point on the River Suck, a tributary of the Shannon, on the boarders of Counties Galway and Roscommon. It is the largest town in County Galway after Galway City, and its hinterland extends up to twelve miles from the town boundary into County Galway, and up to six miles into County Roscommon. The population of the town is almost 6,000 with a further 8,000 residing in the environs.